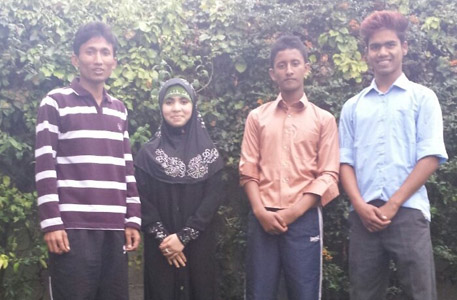 The Rohingya Community Ireland represents a tiny portion of Rohingya people who have left Arakan state in Burma (Myanmar), their native land due to the systematic persecutions and discriminations of the state military rules who have been silently committing countless Human Rights abuses and atrocities against Rohingya for more than 50 years.

With the generous help of the Irish Government, almost all Rohingya from Ireland have been resettled from Refugee camps in Bangladesh where they took refuge after the former military government started an ethnic cleansing programme in 1992 which caused a mass exodus to the neighbouring country, Bangladesh.

The recent transition of Burma towards Democracy has brought one of the biggest disasters for Rohingya – “the genocide of Rohingya” in 2012 – which has caused countless deaths, destroyed villages, the burning of mosques, youths and elderly being killed or abducted and women raped.

As time passes by, we see the continuing persecution of the Rohingya who have lost their homes, rights and citizenship.

1) What does “Global Citizenship” mean to you?

2) Why do you think it’s important for young people  in Ireland to engage in an exchange programme like this?

It will be very interesting and productive to meet all young people to make bonds by forgetting what parts of the world we are from. I believe we can share something interesting about our lives being born and grown up in one of the horrible refugee camps in Bangladesh.

You, we and all young people of our generation need to be role models for the future to show that racism does not exist anymore.

1) What does “Global Citizenship” mean to you?

For me, it means one world one heart because we can all feel and see things that are happening in distant parts of the world without ever being there.

2)Why do you think it’s important for young people in Ireland to engage in an exchange programme like this?

After entering to school, I came to know people from Ireland have suffered difficult situations in the past. I think it might be helpful to share the suffering of our people, Rohingya with both groups to build a great understanding.

Please share your views and experiences. We are very passionate to know.

1)  What does “Global Citizenship” mean to you?

It means global peace. As the world becomes more open, the world also needs to be more open to achieve global peace with all the people involved; young or old, male or female, educated or non-educated, politician or non-politician and religious or non-religious leaders.

All coming together in this programme can give us a boost to make a better understanding of the ongoing discrimination and conflicts around the world. We can also give a positive message to the rest of the young people around the world that we need to be active to achieve the global peace.

Lets stand up for peace, love and caring!