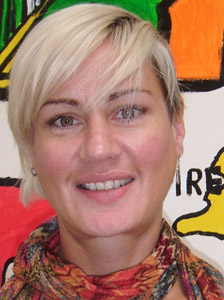 St. Kevin’s Community College is a co-educational second level in Clondalkin in West Dublin.  There are approximately 270 students from the local area and from around the world.  School starts at 9 am and finishes at 4pm, except for Wednesday where students finish at 1pm.  As with most schools in Ireland, students at St. Kevin’s wear a uniform.  Some of the facilities include:

Treat everyone like they are your brothers and sisters.   To have freedom around the world.  We are all connected, we are all in the same world.  We all have a part to play in the world.  Global citizens should have no borders, we are citizens of every country.  To be united, not separated by religion or war.  To be part of the globe.  Working together with different nationalities from across the globe, independent and loyal to each other.  To respect and be respected by all.  Equality.  Be loyal to each other and respect each other.  Learning something new every day.  Citizens from all around the world coming together. Treating everyone equally because we are all human.  Taking responsibility for your actions.  People from everywhere coming together. We are citizens of the globe, everyone should be recognised as part of the world we are all equal.  Peace and dignity.

It is important to engage in these kind of programmes to experience different cultures, religions and ways of life; to learn what other people think about what is happening in the world – different perspectives.

Programmes like this give young people a variety of opportunities, they learn from each other by the things they do and although they live and preach in different ways they are the same.  To learn to make resolutions in life

It is important for young people in different parts of the world to connect in a programme like this because young people can see what it is like to be a young person in another part of the world.  They can learn from each other and see that even though they are from different cultures, backgrounds and histories they – simply due to the fact that they are young people have much in common.

Ceád mile fáilte (100,000 welcomes). Try not to miss an opportunity to get involved.  Looking forward to sharing ideas to making changes and making a difference.  Don’t be shy, say what you have to say.

1. How do you define each of the 6 key themes above?

Inequality Not having same worth. People not being equal

Power Control, Money, To hold over someone, Strong, To be feared

2. Can you give examples of how they are reflected in local issues (in your community and in your country) ?

Globalisation Globalisation is evident in our community when we look at the small business that are struggling to keep afloat when faced with such an overwhelming competition brought by larger companies. Local shops are disappearing while large supermarkets like Aldi and Lidl are getting more numerous.

Development The Gathering. Ireland has suffered under the recession. One of the initiatives to develop the economy is ‘The Gathering’ Irish people are being encouraged to organise events to bring people into the country. We give money to Irish charities like Concern and Trocaire to do development work in other countries

Injustice Some people in Ireland took out huge mortgages to buy homes. Now, some of these people are losing their homes. The bankers who lent people money when they should not have are bullying people and scaring people to try to get repayments. The banking sector however is not being punished for the mistakes it made; instead it is being helped by the government.

Power Having power is having control. A lot of people in Ireland do not believe we still have control over our country. The Troika are telling us what to spend money on and have a lot of control of the finances in Ireland

Conflict Drug dealers Gardaí harassment. People using guns instead of their fists. Now people are more likely to get seriously injured or killed when there is conflict because more people have guns.

3. Can you give examples of how they are reflected in global issues?

Globalisation Globalisation is reflected in the same way local like local issues. Big business is keeping smaller businesses from succeeding. This means less competition for those big businesses and less choice for the consumer.

Development Ireland is a ‘developed’ country and the government and the Irish people send money to ‘developing’ countries. Ireland has sent less money because of the recession. There is corruption in developing countries which means much of the money does not go to the right place.

Inequality Around the world it seems that people are divided by wealth. There are people who have enough to survive and people who do not. Rich and poor exist all over the world. However to be poor in some parts of the world is worse than being poor in other parts. If you are poor in Ireland you can claim social welfare but if you are poor in a developing country with little or no social welfare, you are very poor.

Power Money is power. If you have money you have power. This is especially true in countries with a lot of corruption; You can use your money to bribe people to get what you want. If you have no money you little or no power.

Conflict War all over the world, in different countries. The ones we hear about most are in Syria and Palestine

• Are you typical?
• Living in a global dimension
• Think globally act locally
• If the World had 100 people

Facts
1. 1 billion people in the developed world consume 32 times more than the rest of the population
2. There will be a population of 9 billion by 2050
3. The entire population of the world could fit in the state of Texas (not very comfortably)
4. 11 million kids die from preventable diseases every year
5. 48% of the population are under 28 years old
6. 25% are over 65 years old
7. Appreciation of valuable things such as water, food, education and shelter and how the things we do and use every day are actually from and personally made in developing countries.
8. 33% of the global population is Christian
9. They live on less than $2 every week in poor countries
10. 20% lack access to fresh water