Our Themes and Objectives

This was our first international Summer Camp involving students from our schools programme from all four geographical areas of the project: Ireland, Northern Ireland, Israel and Palestine.

We expected opportunities for dialogue and friendship between all student groups:

All the participants had been active students throughout the SAB schools programme of 2008/9. We therefore promoted the summer camp as a great opportunity to build on the sucess of the past year.

The main themes selected by the students for further exploration were :

Schools Across Borders had been working towards staging this event for three years. First we held a Cross-Border and Cross Community Summer Camp in 2007 for our participant Dublin and Belfast students. In 2006 we brought the Israeli and Palestinian Coordinators and teachers together in Amman to help strengthen our joint strategic objectives.

It has been a long and winding journey, but worth every step of the way!

The Summer Camp aimed to the build on the progress already made. For the participants, it would be a means of building on their achievements within the school year programme…

It would remain to be seen whether our grand aspirations could be met. If it succeeded, it would be a huge step for everyone involved..and serve to show future participants just what can be achieved by young people who are prepared to cross borders and work with each other and for each other.

All our expectations were well surpassed! Read on…!

The students who made this Summer Camp such memorable experience, were:

The group leaders who accompanied and provided support to all the participants:

Adli Daana, International Palestinian Youth League (IPYL), Hebron, West Bank
Adli is the Director of IPYL, our partner organisation in Hebron and is the Palestinian Coordinator of the Schools Across Borders programme in Hebron.

A very special thanks also to all those who made our programme such a success.

Please see Programme Schedule below for full details of Facilitators, Speakers and organisations involved in the Summer Camp.

This advanced planning exercise also served as an opportunity for the participants to share and be aware of each other’s views and feelings on these core aspects.

In addition, we facilitated an exchange of written messages between the Israeli and Palestinian student groups. This exercise helped to confirm the mutual sense of common purpose and enthusiasm for the forthcoming encounter.

The following extracts from our collated data indicate the range and depth of their personal objectives and the kinds of challenges expected from the participants:

What do you want to achieve from this summer camp?

What do you see as the challenges?

What sorts of themes would you suggest for the group discussions?

The range of programme activities were developed with complementary objectives in mind.

We set out to provide spaces and opportunities for the participants, as follows:

We also ensured that students could organise and lead their own activities:

However, by process of group evaluations and consensus, the participants decided that these vital last two days in Belfast and Dublin should focus on the following two actions:

1) to hold an open discussion on the realities and issues of conflict that the Israeli and Palestinian students needed to discuss further.

It was felt by all that everyone now felt ready and willing to discuss difficult differences of opinion.

2) to prepare and present a final group message which would be agreed by everyone as a statement of common principles, to represent each participant and the group as a whole, but also as a positive signal to all other future groups involved in the Schools Across Borders programme of what can be achieved by young people working together.

It was agreed that this Final Message, entitled “Our First Step” would be written up and filmed so that it could be posted up and viewed where possible in all schools involved in the programme.

Both final actions were carried out to the general satisfaction of all participants.

Here are some sample quotes from the participants’ assessments of the different programme activities:

It is fitting that we add the Final Message decided upon by the group: 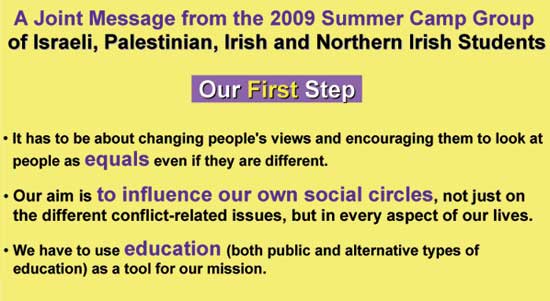